Do You Know the Advantages of Automatic Thread Rolling Machine?

Thread rolling machine manufacturer introduces you: Thread rolling is a multi-functional cold extrusion forming machine. The thread rolling machine can perform thread, straight, twill on the workpiece in the cold state within its rolling pressure range Processing such as rolling; it is an advanced non-cutting process that can effectively improve the internal and surface quality of the workpiece. The radial compressive stress generated during processing can significantly improve the fatigue strength and torsional strength of the workpiece. Energy saving and low consumption ideal process.

Definition: It is a multifunctional cold extrusion forming machine

Working principle: Use two threaded sticks to squeeze the workpiece to be processed, and plastically deform the outer surface of the part. Form a thread. Because the thread is produced by plastic deformation, its strength is better than that produced by cutting. 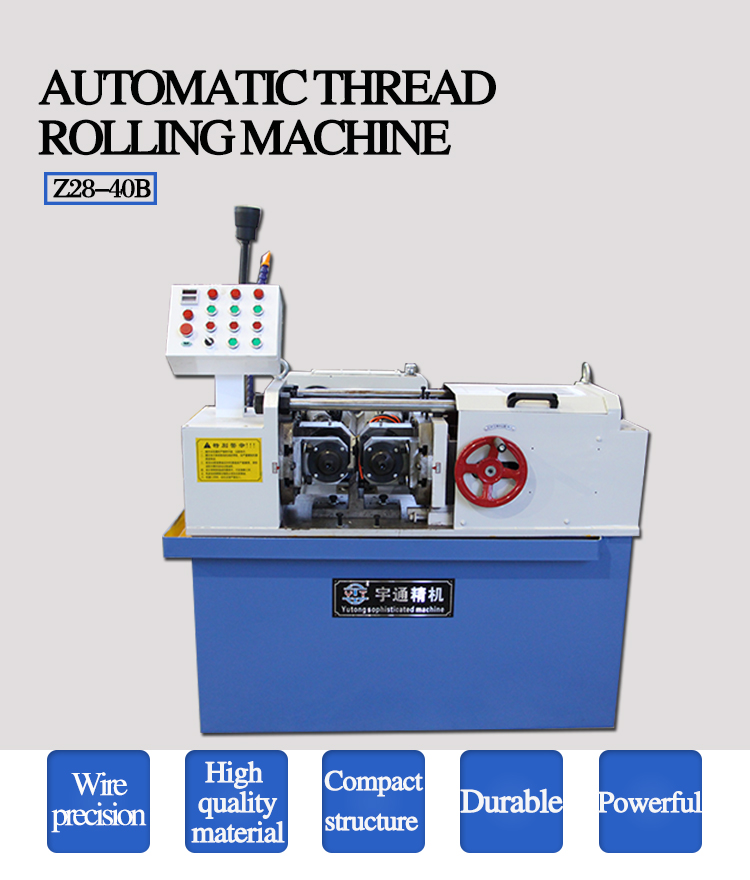 Large automatic thread rolling machine processing principle: the principle of cold rolling on the small modulus involute spline principle. L and R are a pair of involute rolling wheels with the same parameters, which are respectively installed on the two main shafts of the thread rolling machine, and can be synchronously rotated in the same direction under the drive of a transmission mechanism. The R wheel can be driven by a cylinder to perform radial feed motion. The L wheel can be adjusted to coincide with the indentation of the R wheel on the surface of the workpiece P through the adjustment of the adjustment mechanism. Workpiece P is positioned and clamped with two center holes. Adjusting the fixture can move the workpiece axially, and when it is under stress, it can swing a Φ angle around the axis parallel to the O axis of the fixture and the machine tool spindle to ensure that the workpiece is always cold during the rolling process. It keeps free rolling with the two rolling wheels, and it is easy to clamp the workpiece.

2. Pneumatic system feeds the workpiece to the processing place of the rolling wheel

3. The thread rolling wheel feeds and clamps the workpiece (this step can be performed synchronously with step 2, but the roller cannot clamp the workpiece before the workpiece is delivered in step 2)

5. After processing, the workpiece naturally falls into the inclined rail under the action of gravity

6. The workpiece falls into the finished product frame with the inclined guide